Software development market is amply supplied with plenty of tools and products. There are many website and mobile applications emerging on an everyday basis that helps us in making our daily tasks easily doable!

Why is React Native a very familiar term in the software industry? You might have even heard what Mark Zuckerberg once said, “The biggest mistake we made as a company was betting too much on HTML as opposed to Native”. If you are fence-sitting thinking whether or not you should choose React Native for your forthcoming mobile application development projects, Webdura is giving you the reasons why you shouldn’t opt out of the React Native framework.

What is React Native?

React Native is developed by Facebook Inc and is an open source mobile application framework. A number of applications are developed using React framework along with Native platform capabilities.

Generally, React Native are used to build applications for :

So let us understand what exactly React Native is! React Native is a framework used by developers to build Native mobile apps using JavaScript. React Native facilitates the deployment of a single codebase for building applications across different platforms. This is one of the biggest advantages that Webdura sees in React Native framework. Our Dev Team utilizes this easiness of React Native and is currently being applied for three different projects namely Talk2, Wuyers and Lyringo.

Why React Native was Chosen for Application Development?

Lyringo is a learning application developed in React Native platform. In this application, there will be a video display alongside subtitles. The subtitles will be in the preferred language that users intend to learn.

Webdura also has a food delivery app that has been developed in the React Native programming platform. We could come up with an easy-on-eyes UI, component-based food delivery model like Wuyers using React Native. 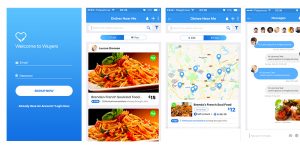 Talk2 which Webdura developed for communication was yet another app that was plotted on Expo and React Native CLI platforms in React.

For Talk2, Lyringo and Wuyers, React Native has helped in reducing the time for developing the applications and also bringing down the cost for its production. We never had to employ a separate Android team and iOS team for developing Talk2 and Lyringo- it could be handled by a single React Native team due to the single codebase functionality.

Here are the few reasons why Webdura commands React Native for our application development process:

What are the processes involved in React Native Mobile App Development?

What are the Advantages of React Native?

Webdura has the following reasons for plying React Native for our projects:

It enables the developers to learn and acquaint easily and can be accessed from anywhere hassle-free.

Developers need not write separate codes for iOS and Android platforms. A Single codebase can be used to develop both which will help to reduce time and cost for project completion.

Enhancing the performance of the app with the help of native modules and controls. It interacts with iOS and Android native modules without any interference.

Apps built with React Native will have a more responsive UI, flawless UX and less time to load the screens.

Developers have access to Third party plugins like JavaScript modules and native modules. Easy and quick plugin with a third party module.

Any changes in the code can be done without affecting other components or modules thereby making apps more stable and reliable.

Ability to quickly upgrade the app due to its impulsive and intuitive modular architecture. The modules can also be reused while working with other web and mobile APIs.

React Native is a new programming language and experts believe that there will be more room for upgrading.

At the conjoining section of the host platform and React platform, certain debugging issues are usually faced in React Native.

React Native requires longer initialization time and JavaScript being the reason for the same.

Our developers find the framework irresistible because of features like code reusability, accessibility to certain pre-made elements and reducing effort and time required for developers to complete projects.

React Native is showing good progress in terms of growing developers community, dodging the drawbacks as an immature software, mounting components set and, overcoming other inadequacies.

At each stage of development the client will suggest feedback to see the working product in each iteration termed as Minimum Viable Product (MVP)  for assessing the product, giving suggestions and feedback and enhancing the product using more features. Developing the mobile application using React Native makes the MVP idea easily doable and that too at optimal time and cost.

Compared to other mobile frameworks like native app development, React Native is a strong competitor. Webdura strongly recommends this cross-platform programming language for everyone who is in the business of mobile app development.

How about a lil' game of fill in the blanks?

We love working alongside ambitious brands and people